Qualification: GCE A Level in Film Studies
Exam Board & Specification Code: WJEC Eduqas; Specification
Course Entry Requirements: 4 in English Language GCSE and 4 in English Literature GCSE
Please make sure that you have understood the overall entry requirements to study at BHASVIC. These are available here and outline the GCSE grades you need to take up one of the Study Programmes at the college.
Length and size of qualification: 2 year single course
Timetable hours: 4.5 hours per week
Assessment method: 2 x 2.5 hour exams plus a practical or written project
BHASVIC Department: Media and Performing Arts

What will I study?

Film Studies is designed to explore and creatively engage with all aspects of filmmaking. It involves analysis of a wide range of texts, including British, American and European cinema, silent film, documentary and experimental film. You will analyse both the technical and creative choices made by film makers to produce meaning, as well as develop an understanding of how a film’s production context affects the meanings it generates. Individually, students will work on a project during their second year which will involve making a short film or a screenplay (30% of the final grade). You will study twelve films and write analytical essays on them, focusing on spectatorship, aesthetics and film theory, thereby developing your critical and analytical skills. You will be assessed on these in two written examinations. There is a practical element to the course, which makes it suitable for those who want to work in the film industry, however this is a largely written, theoretical course.

Is this course right for me?

The subject contains a mixture of written analysis and practical work. The main focus is on critical analysis of film texts. You will develop an understanding of how the technical and creative aspects of film-making create meaning for audiences. You should enjoy watching a wide range of films, like sharing opinions on these with others and be able to write critically about films. This course is best suited to people who are strong writers, who enjoy watching and analysing a range of films (including World Cinema). Film Studies goes well with any theory-based, essay subject such as Media Studies, English Literature, History, Classics, Politics, Sociology etc. as well as Digital Creative Media, IT or Computer Science if you enjoy the practical work.

There are far more job roles on offer in the Creative Industries than you might think. This course prepares you for the broad and amazing range of roles available in this sector. Jobs directly related to this subject include Film/Video Editor, Location Manager, Programme Researcher, Runner, Broadcasting/Film/Video. Jobs where this subject may be beneficial are: Broadcast Engineer, Broadcast Journalist, Television Camera Operator and Television Floor Manager. Useful websites to research careers and wider progression options could include Creative Skillset, Creative Choices, All About Careers and The Apprenticeship Guide. 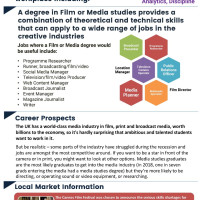 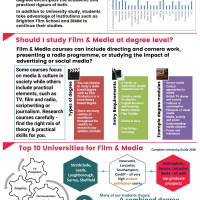