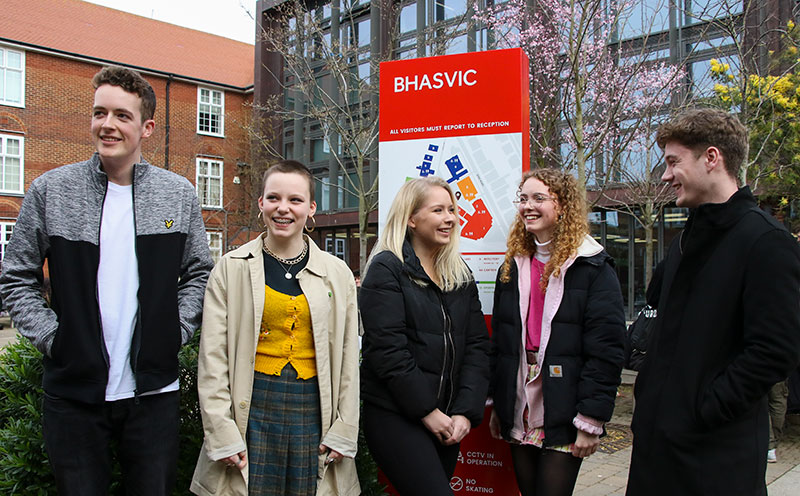 BHASVIC students have received a multitude of offers from Oxford and Cambridge Universities this year, yet again demonstrating that the college is one of the largest providers to these prestigious Higher Education establishments.

Forty-six students are in receipt of an offer this year which means a total of 103 students have been offered a place to study at Oxbridge in the last two years alone, showing that BHASVIC is a pipeline to these world-class institutions. Thirty-two students have been accepted in to Cambridge with fourteen heading to Oxford – so long as they meet the grades required.

The group of students have been drawn from 19 different schools from across the region (a full breakdown follows this report). Between them, they have selected 28 different degrees to be studied at 29 different colleges. Natural Sciences at Cambridge stands out as the most popular degree choice with 5 students opting for this. As in previous years, a number of students from this cohort have been part of our Widening Participation programme which aims to work with students whose parents do not have HE qualifications or those who come from areas with low HE participation.

We asked some of our students what difference BHASVIC had made in their aspirations and journey towards receiving an offer.

Lucy Wright has an offer to study Human Social and Political Science at Christ’s College Cambridge. The ex-Chichester High School for Girls student said: ‘If I hadn’t come to BHASVIC I wouldn’t have even thought of applying. At enrolment I was identified and sent to talk to the Oxbridge Coordinator and at the end of my first year I moved into a specialist tutor group which massively helped me to navigate and prepare for the application process’.

With an offer to study Veterinary Medicine at Sidney Sussex, Cambridge, Sam Butler is an ex-Peacehaven Community School Student who has always had a love of animals and was inspired to apply by other students with similar aspirations. ‘Being in my Medics and Vets tutorial pathway meant I had both the benefit of specialist input for my course as well as specialist input from Neil (our Oxbridge coordinator) who encouraged me to make an application’.

Beatrice Uprichard has an offer to study Architecture at Queens College, Cambridge. Bea said ‘In secondary school we would see presentations which made it seem like it was far too difficult and ridiculously rare to get to places like Cambridge, coming to BHASVIC it has been normalised, made non-elitist and has become possible’.

Originally wanting to be a Medic, Anabel Riley has taken a different path with an offer to study Human Sciences at Mansfield College, Oxford. Her degree combines, biology, genetics, psychology and demographics amongst other areas. Anabel said that a key ingredient was ‘ex-BHASVIC students coming in to help with our applications, which was invaluable and something you wouldn’t get elsewhere because of the multitude of them. Less than 30 places are available for my course and I was able to speak to two different people who were studying it to directly help me’. We asked if Anabel would come back to help future students and she replied ‘of course!’

Matt Pereira has an offer to study Spanish with Portugese at Gonville & Caius, Cambridge. Matt said ‘There is an academic culture here which makes it a very acceptable environment to make such an application. I wasn’t really considering University as an option at all before BHASVIC but whilst here it has become a reality’.

Principal William Baldwin said: ‘For an open access state funded sixth form college to be consistently getting in the region of 50 offers a year for students to study at Oxford or Cambridge is truly remarkable. There are often stories in the press about Oxbridge success in state schools that ignore the fact they are highly selective of those who enter their sixth form. We pride ourselves on ensuring that students with a range of academic abilities can not only come to BHASVIC, but if they are interested and aspirational they can also go on to study at Universities like Oxford or Cambridge without necessarily having been a straight A student at GCSE. I’d like to thank our Oxbridge team who do some incredible work to prepare and guide students through this process, to also thank the schools who have laid the foundations for these applications and share our student’s success with them. Finally, I’d like to wish our students luck as they work towards their exams and securing their offers’.