Collaboration between BHASVIC and East Sussex Fire and Rescue Service

On 23rd October five of our A level chemistry students presented the findings of a year’s worth of Research – conducted once a month – into the flammability of a range of commercially available peat composts. This built on previous years’ work on this project which began in 2017, when a number of callouts to ESFRS were due to peat in outdoor plant pots catching fire, but it was not clear how the fire started. We were asked to look into possible reasons/trends behind this phenomenon and have spent three years investigating different methods of ignition and the peats’ responses to various attempts to light them. This was done by drying samples of them in a dessicator and taking small uniform amounts each month and testing ignition using a spark gun, a lit wooden splint and a glowing wooden splint.

The previous two years’  work allowed us to eliminate certain brands of peat as they simply were not lighting, instead focusing on two brands that had started to show signs of combustion once they had begun to dry out. We also started looking at the effects of compaction on peat flammability with an ingenous system designed by one of our students.

Below are some pictures of when the ESFRS officers came in to find out what conclusions we arrived at. All the work was conducted and largely led by the students themselves.  There are a number of benefits of this project in terms of the students’ prospects and future employment: 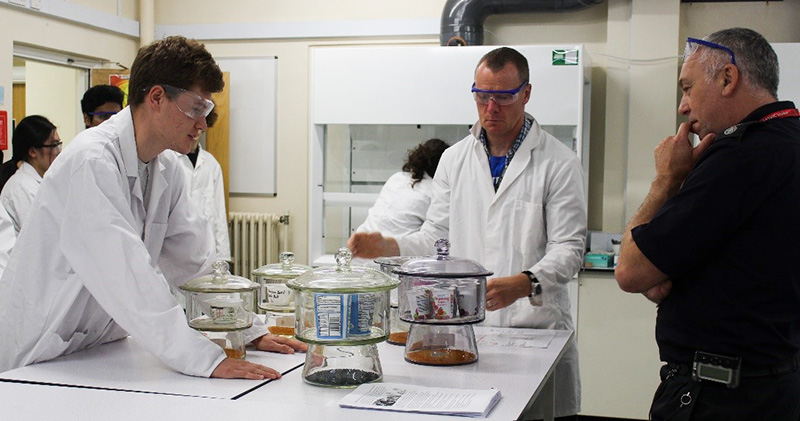 Click here to see the slides written and used by the students to present their ideas.