I was one of 11 BHASVIC students who attended the recent Model United Nations conference in London in January. The event was held by Woodhouse College and saw hundreds of students from across the UK take part in their biannual MUN. Prior to the event, we were able to choose what countries and committees we wanted to represent. BHASVIC was allocated France and India, both fascinating countries that really challenged students with the topics presented. We held meetings discussing our preparation for the event, writing our position papers on a variety of topics that we then read out to our committees. On arrival on the Friday we were immediately sent to our committees, mine being the Economic and Finance Committee, representing India. Over the weekend we worked with our committees to voice and express our countries’ views and opinions on the three topics presented, with some fierce and sometimes heated debates. By the Sunday afternoon, all committees had written, agreed on and voted for resolutions for each of the topics discussed. We took these resolutions into the General Assembly, where each topic and resolution was presented to the council, and voted to either be passed or refused. We all found the weekend a fascinating experience, having the opportunity to meet a host of new people, debate some dynamic topics and learn more about the process and history of the United Nations. 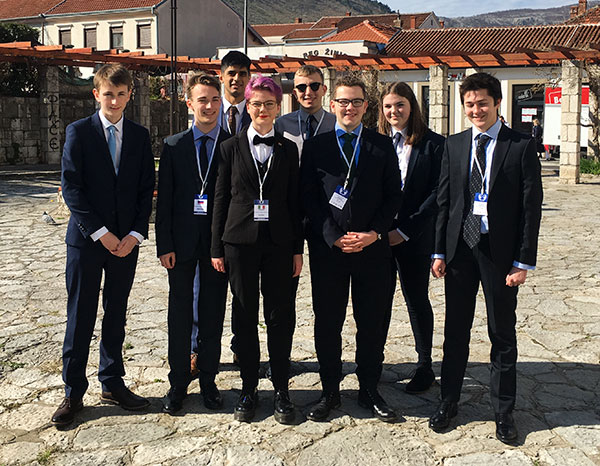 Come for the conferences, stay for the Backstreet Boys

From the 20th-24th of March, eight members of Model United Nations club (MUN) attended ‘Mostar MUN’ in Bosnia and Herzegovina, a trip that none of us will forget.

Each student, or ‘delegate’, represented a different member state of the UN - including two BHASVIC students who had the challenging task of representing Bosnia and Serbia in councils that included numerous students from the Balkans. Over the course of four committee sessions, we discussed many issues in heated debates, aiming to achieve solutions in the form of formal resolutions. Each council was a replica of the real United Nations, including all of the formal procedure. The Security Council attempted to resolve the economic crisis in Venezuela, while the Human Rights Council tackled the ‘re-education centres’ in China (but failed to reach a resolution). Opening speeches initiated the topics, followed by monitored debate (moderated caucuses) and then negotiation sessions (unmoderated caucuses). Characters were played; one delegate passionately defended the ‘illicit trafficking of small arms in Bosnia and Serbia’ while being Serbia, leaving the room in shock while confidently leaning on the podium. Three of BHASVIC's delegates also won ‘honourable mention’ awards for valiant efforts in the meetings.

We took a guided tour around Sarajevo and WE ACTUALLY SAW WHERE FRANZ FERDINAND WAS SHOT!!! (not that it was a big deal or anything…). For such a seemingly divided country, it was beautiful to see a mosque, a synagogue, and an orthodox church all within 200 meters of each other. The ‘unspoken rule’ that everyone’s beliefs are respected was a stark reminder that even in the most tense environments, people can make peace.

Then it was on to Mostar, the secret gem of Europe. Sitting in a restaurant by the river overlooking the ‘Stari Most (the old Ottoman bridge) felt like a scene from Mamma Mia – or a destination holiday. It was strikingly scenic and we enjoyed exploring the city to such an extent that some of us were late to a meeting… although Mostar's phenomenal taxi service came to the rescue!

The warm people of Mostar were thrilled to share their culture with us. The school we attended - United World College (UWC) is an international boarding school, which meant that we all had the opportunity to interact with Bosnians, Serbians, Macedonians, Slovenians, Russians, Austrians, and many more nationalities which again was a highlight; gaining Instagram followers from all over the globe.

The social events certainly also were not to be missed, with clubs opened up just for the MUN attendees. The Backstreet BHASVIC Bosnia Band will be remembered for years to come thanks to our rendition of 'Don't Stop Me Now', performed to an adoring crowd of fellow MUN participants. Although we all did enjoy ‘Hips Don’t Lie’, the Bosnian music now features on our favourite playlists. The students were so welcoming, that by the end of the evenings you could not tell who belonged to which school. 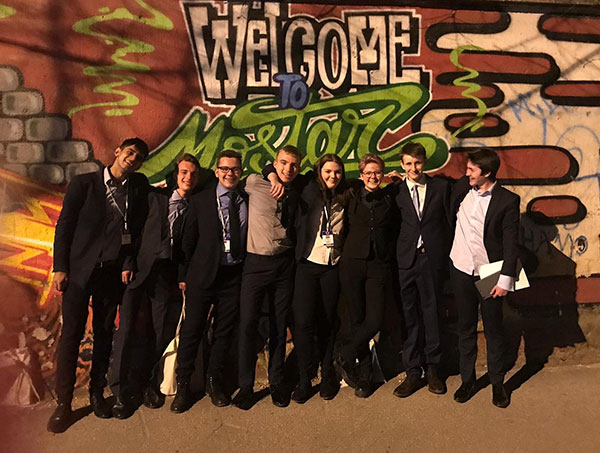 Warm goodbyes were said at the closing ceremony, and the party lived on during the coach back - because who doesn’t love belting ‘Angels’ to a stranger driving your private minibus? After an arduous journey back - with a connecting flight nearly missed due to the purchasing of replica tanks fashioned out of fake bullets - you would assume that everyone was desperate to arrive home.

And we enthusiastically thank Jo Wilcox for making this a reality. The notion of MUN club was just an idea in September from a passionate politics teacher, and has now gone international, truly inspiring us all.